*IT IS KEY TO EMPHASIZE stabilization of the pelvis and lumbar spine both statically and dynamically in all positions and throughout all movements. Two positions often referred to are neutral and imprint. In a neutral position, the natural anteriorly convex curve of the lumbar spine is present. When lying supine, the triangle formed by the ASIS and the symphysis pubis should be parallel to the mat. This is the most stable and optimal shock-absorbing position and a good place from which to promote efficient movement patterns. Neutral alignment should not be achieved by forcibly arching the back, but rather by allowing the weight of the sacrum to rest on the mat. While breathing, and with the transversus abdominis engaged, no strain should be felt through the spinal extensors in the lumbar area. If muscular tension occurs, shift the pelvis slightly toward a posterior placement. It is more important for the lumbar area not to strain than for the ASIS and symphysis pubis to lie in the same horizontal plane. For example, someone with large gluteals might actually create an exaggerated lordosis in the lumbar spine by trying to have the ASIS and symphysis pubis lie in the same plane. An imprinted position combines a slight posterior pelvic tilt with slight lumbar flexion. The normal curve of the lumbar spine lengthens toward flexion by engaging the oblique abdominals to approximate the pelvis and the rib cage anteriorly.When supine, the pubic bone will be slightly higher than the ASIS. The pelvis is not so tilted that the sacrum curls off or loses contact with the mat. It is not necessary to press the lower back all the way into the mat or to tuck under by overusing the rectus abdominis and gluteal muscles respectively. The degree of contact between the lumbar spine and the mat will differ from person to person. An imprinted position should be used to ensure stability of the pelvis and lumbar spine, if neutral alignment cannot be stabilized. When there is weakness in the obliques and other abdominals, placing them in this
slightly shortened position can help maintain their engagement. This will often be useful when certain postural tendencies are present (for example, lordosis).When one or two feet are secure on the mat or other apparatus in a closed kinetic chain, the pelvis and lumbar spine are ideally neutral. When both feet are off the floor in an open kinetic chain, the pelvis and lumbar spine should be in an imprinted position at first.Once enough strength has been developed through theabdominal muscles to achieve stability, a neutral position can be maintained in an open kinetic chain.

**ROCKING PELVIS
Rock pelvis through anterior and posterior tilts to explore the range of movement. Neutral position will be somewhere between the two.

**LEG SLIDES
Test stability in a neutral position by sliding one foot along the mat, then drawing it back in. Limit the range of motion to where the lumbo-pelvic region can be stabilized.
Inhale To slide foot away.
Exhale To return. 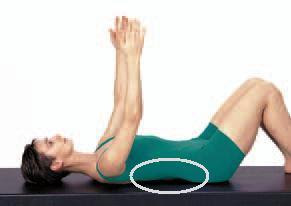 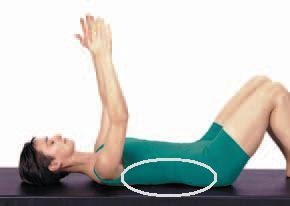 The transversus abdominis remains engaged throughout while the obliques shorten during imprint, and lengthen during return to neutral. Try lifting one or two feet off the floor to test the stability of the imprint